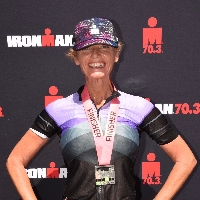 On March 30, 2022, in the midst of a 9-mile run, I was hit by a car that knocked me to the ground. The world spun for a few seconds as I managed to standup, looked at my Garmin watch which read 8.5 miles, paused it, found my phone thrown to the side of the road, told the driver where to go and finished my run home. Because I was wearing a long sleeve black shirt, I assumed I was wet because of sweat. Only when I changed clothes did I realize my left elbow was clipped by the car.

I cleaned up, said hi to my dog and drove myself to the ER where I got stitches and a splint and headed home the same day. Despite road rash on my right hip, my wrists a mess and hitting the concrete with my head, I walked away with nothing but an elbow injury. ** tip for road rash: unrefined coconut oil is antimicrobial, perfect for road rash!

The next morning, I hopped on my indoor trainer for an easy ride. On day four, I returned to running. 11 days post elbow break, I was back to running nine miles at 9:16 split with a full elbow splint.

Eight weeks later, I was running 17 miles at 9:06 pace.  The night I got my splint off, I returned to the pool, which also serves as my main PT as I incorporate different swim strokes to improve my range of motion in my elbow.

Thanks to my hours of swimming, the mobility I gained allowed for me to get dressed and continue living without assistance on my own as my elbow healed up for the next 8 weeks.

Here are some stats to think about:

Women are more than 2X likely than men to have Osteoporosis.

Less than half of American adults can even swim 25M!

It doesn't have to be this way; I bucked these eye-opening trends by choosing a healthy way of life. Yes, IRONMAN gives you bragging rights for life, but it also empowers you to live on your own terms.

The car accident wasn't the first time exercise saved my life.  In 2015, I had a double mastectomy with reconstruction when I learned I was a carrier of the deadly BRCA1 mutation following the sudden death of my young cousin from ovarian cancer, whose mother (my aunt) was receiving treatment for breast cancer at the exact time at the exact same hospital.

Following my cousin's death in 2013, Angelina Jolie was making headlines with an inherited breast cancer gene called BRCA 1 and her story captured my attention. I immediately began working with my insurance company to get a BRCA gene sequencing test done through blood work through a company called Myriad Genetics. And sure enough, it was confirmed I am a carrier of the faulty BRCA 1 gene with a specific sequencing common in Eastern European Jewish women like myself called a "founders mutation".

With no screening available for Ovarian Cancer and knowing I was done having children, I took steps in late 2013 to remove my ovaries and uterus (one of my grandmothers died of uterine cancer) to avoid the same fate as my cousin.

Only after my own breast care doctor's sudden death from breast cancer (she was 46 years old) did I choose to finally take steps to prevent breast cancer.  In December 2014, I walked in to see Dr. Corgan for my usual screening (I was on a rotation program of biannual mammograms and MRIS in hope of catching cancer early) when I was advised to find a new doctor, she could no longer treat me. I wasn't given any more information than that. I would later learn she was suddenly diagnosed with cancer and quickly died in April 2015 after I became an established patient at Emory.

Knowing the mastectomy would require three surgeries total with the first lasting approximately four hours and two young boys at home with a disjointed family, I didn't have the luxury of being bedridden for weeks. My doctor at Emory warned me my lungs would take the worst grunt of the surgery, with a machine breathing for me for nearly four hours. After researching Dr. Google for how to build up lung capacity, I determined running was going to be my best defense.

Meanwhile, at work, I had just finished writing up an article for my monthly newsletter about my colleague who recently completed an IRONMAN (my first exposure to the sport) so I picked his brain on how to become a runner; I had been an off and on injury prone runner until that point. I had eight months to get into the best shape possible ahead of my surgery. He introduced me to his running coach, Kyle, and also suggested I try Newtons, the presenting sponsor for IRONMAN at the time. I picked up a pair of Newtons, began the painful transition to minimal drop shoes, which force you to land mid-foot vs. on my heel as I was doing, and immediately hired Kyle and a personal trainer to get me in the best shape possible ahead of the grueling surgeries.

It worked. A week before my surgery, I ran the Atlanta 10 miler in 1:37:49. As my doctor promised, my lungs were on fire after the first surgery that lasted nearly four hours. He and his team had no mercy and had me walking the hospital floor within hours of surgery, along with immediate exercises to get mobility back quickly in my arms and upper body. After 48 hours (I earned an extra night at the hospital due to a fever) I was released to go home.

While most women struggle to even sit up, with my doctor's blessing, two weeks post mastectomy, with my chest taped up, I returned to treadmill running. 11 weeks later, I ran a 15K in 1:30:12 with tissue expanders in my chest. And one year later, I quietly celebrated my year of surgeries with the Las Vegas Rock N Roll Half Marathon with a time of 2:03:09 in November of 2016 followed by a massage.  And I haven't stopped running since.

While the surgeries were successful with no immediate complications, that all changed in 2017 when I had a ministroke I struggled to recover from that left me exhausted that led to a terrible coffee habit of 6 to 8 cups per day while fighting very high levels of inflammation in my body. My doctors weren't much help, who told me I was fine. But I wasn't. In 2018, I abruptly left corporate to get my health in order.

Since 2018, I have overhauled my diet, eliminating nearly all corn syrup, ultraprocessed foods, refined sugar, most dairy and red meat. I went from eating out to cooking nearly 95% of all my meals with one ingredient foods. As a result, I lost nearly 40lbs which I continue to sustain today. I slashed my cholesterol by nearly 40% without a single pill and the days of annual sinus infections are behind me. And I am 100% coffee free.

The idea of IRONMAN still lingered, so I began to slowly take steps to make it a reality once my diet and health were once again under control.

I transitioned from being an almost exclusive treadmill runner to an exclusive outdoor roadrunner, I haven't been on a treadmill going on two years now.

In 2019, I completed my first marathon. While it wasn't the experience I trained for, I ran it with a sinus infection, I was so proud I finished!

In April 2020, newly divorced with everything closed around me, I began road cycling. It was a humbling start with 100 miles. By April 2022, I had cycled 10,000 miles without a single group ride.

Today, thanks to my disciplined training sessions and diet, I have a VO2 Max that hovers between 54 and 55, placing me in the top1% of my age group. Today, my "easy" days consist of 5 mile runs with sub 9-minute pace or 20 mile rides. I love being active every single day! And that is how I got to where I am today, actively training for my first 140.6 while raising money and driving awareness for the IRONMAN Foundation and Women For Tri!

This year, I am proudly joining a select group of athletes from around the world on TEAM IMF to support the mission of the IRONMAN Foundation. Together, we share a passion for creating positive, tangible change in our race communities and proving that "Anything Is Possible" as I train for my first 140.6-mile triathlon consisting of a 2.4-mile swim followed by a 112-mile ride and 26.2-mile run through Sacramento on October 23, 2022.

I want to demonstrate to other aspiring athletes and triathletes, men, women, kids, moms, dads, grandparents, who may not know where to start or even heard of IRONMAN or could be an underdog such as myself, that even with odds stacked high against you, through hard work, discipline, perseverance, and showing up for yourself every single day, anything really is possible; Just take it one step at a time.

And you are never too old or too young to start. I transitioned to triathlons in March of 2020 at age 42 from endurance running and completed my first ever triathlon, a 70.3 Mile IRONMAN at age 43 in extremely adverse circumstances. But that didn't stop me from placing in the top 45% for all women that day, as I completed the race in 6:24. Nor are my circumstances defining or stopping me now as I continue with my grueling training schedule of 14+ hours a week. I show up for myself every single day... broken elbow and all.

Please donate to the IRONMAN Foundation, every dollar counts!  The money I raise will benefit community groups & organizations in our community(s) via grant funding. In 2021 alone, the IRONMAN Foundation distributed more than $2.1 million to 1,500 organizations worldwide. $100 could mean bikes for several kids, money that helps keep a community center pool open or money that goes to honoring Gold Star families, or supporting diversity in sport through initiatives like Women For Tri, an organization I am passionate about as endurance sports has dramatically changed the trajectory of my own life.

Women For Tri's mission is to identify and diminish primary barriers to entry and mobilize triathlon advocates to encourage and engage female athletes across all distances and represent all athletic abilities while embodying the heart and soul of what makes the sport so rewarding: testing your ability, overcoming challenges, and realizing the full depth of your potential in the most widely recognized test of endurance – triathlon.

And here is my monthly training diary! I also have a public profile on Strava where all my training is logged and open to the public.

One of the things I am most proud of is not my times, but my minimally processed diet and fueling with real food. Through IRONMAN, I learned how to eat properly with a balanced diet of carbs, fat and protein. I don't use pre-workout or excess caffeine to train of rmy results. 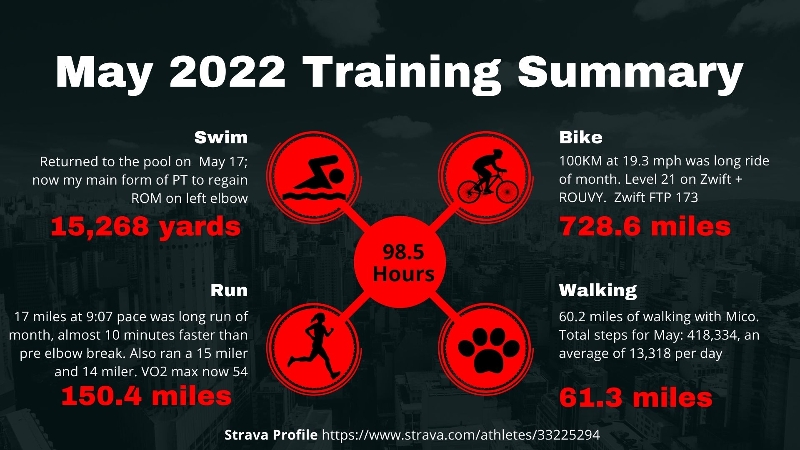 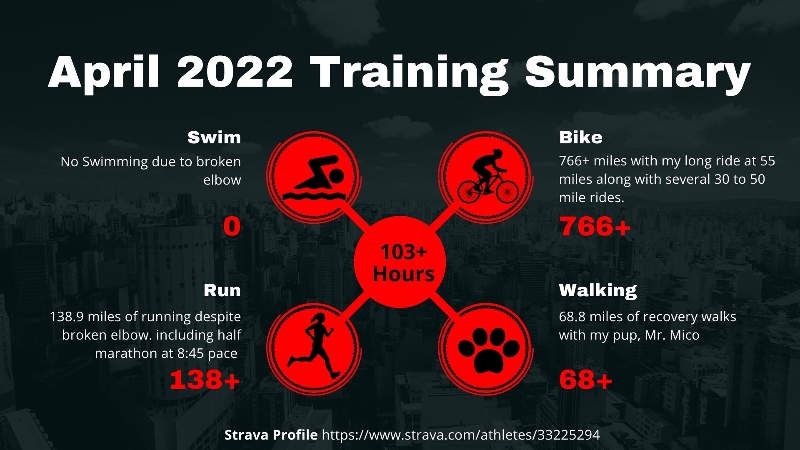 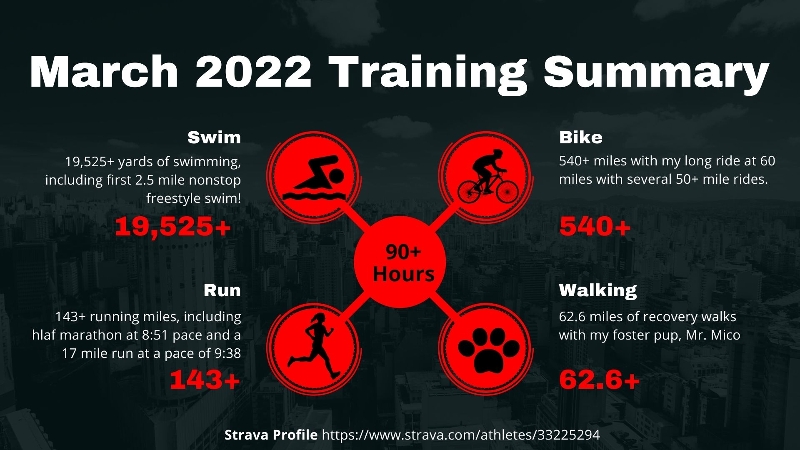 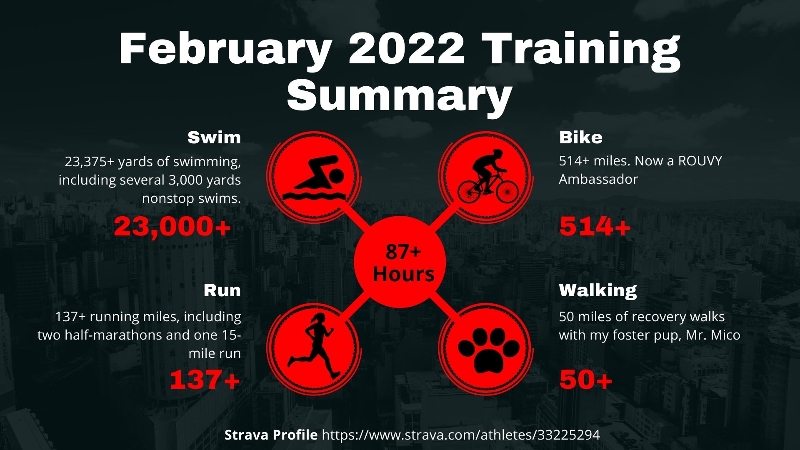 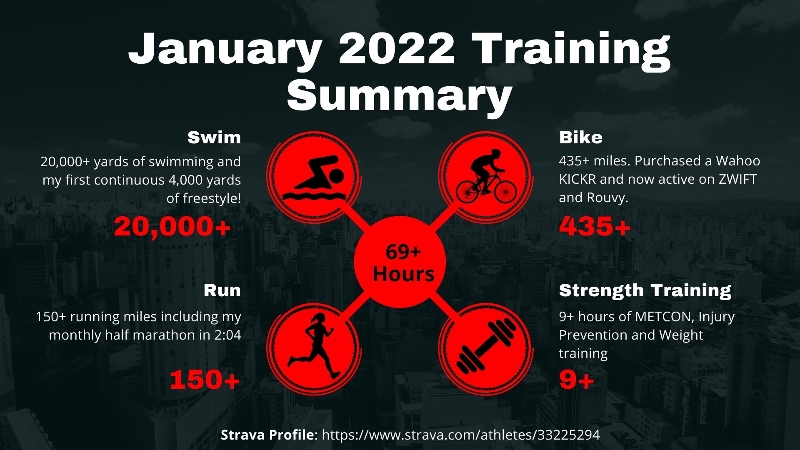 Get The Word Out